Figure stones, or Sugata-ishi, is a very expressive form of suiseki for us.  They can be people or animals.  Last year while collecting we found three stones that look like the heads of a dog.  We are not sure why we found so many at one time, but maybe it was a pack!

These types of stones are often representations of standing people and we want to show a few of them today.

A very nice person stone with a diaza by Koji Suzuki.  This certainly looks like a young woman wrapped in a clothing.

When Jeff and I looked at this stone, there were several ways it could be positioned and none of them were at this angle. However, after about 10 minutes of turning the stone every-which-way this view appeared and it was clear this was the preferred position and thus a daiza from Koji Suzuki was commissioned.

This is a lovely stone as if the person is quite aged – thus in a bent position – or perhaps walking in a stiff breeze. 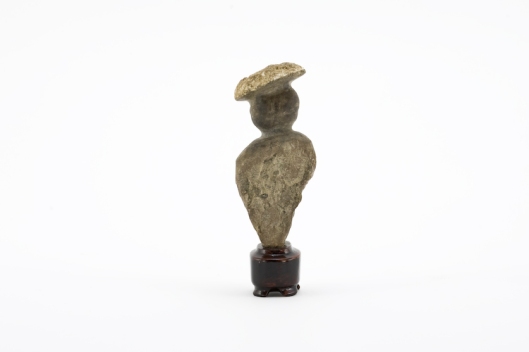 Everytime we see this stone we smile.  It clearly is a carved stone, but nice for a collection anyway.  It reminds me of one of Peter Tea’s bonsai pot hat photos.

Peter with a Bonsai Pot Hat

We purchased this stone from Mr. Suzuku at the Green Club in 2010.  Kj liked it as a figure stone.  Could it be natural? Well we don’t think so but they did a good job of carving the stone.

Is a carved stone a suiseki?  Oh man what a debate.  Clearly in most circles they are not; however, there are a few instances of stones in Japan that are known to be carved but are held in such high esteem due to age and provenance that they are classified as suiseki.  It is your call on what you like and classify as far as we are concerned.  We don’t really want to engage in that debate.