In late 2016 an opportunity arose to acquire several nice stones from a collection in Japan.  What made these two stones special was knowing the prior owners and the provenance of the stones.  The first stone we present has the formal name of “Yayoijin” which directly translated means the last day of the third month of the lunar calendar. The more poetic meaning is – the last day of spring. 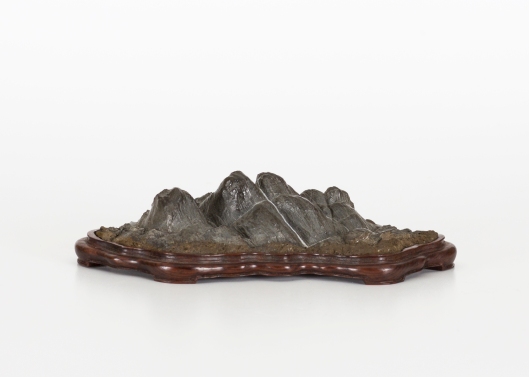 The word yayoijin is used in haiku poetry, and in the case of the stone it likely refers to the find thread waterfalls, in which the final melt off of the once snow covered peaks.

This is a small stone at only 14cm wide (5.5 inches) but it has great character, movement and lovely thread waterfalls.  It has ideal “shun” – surface texture that the great Furuya stones have.

This stone was once owned by Tanimoto Kyakusui who was a great authority on Furya stones from Wakayama back before the stone boom (1960s).  He was a stone dealer, and inscribed most of his boxes, and was also a daiza carver. In this case, the daiza was not carved by him but by a different person.  A side note is that Tanimoto was Koju Suzuki’s teacher for daiza making.

The daiza was carved by a person using the “Fune” mark which translated means boat.  All we currently know about him was he was one of the top daiza carvers in the Tanabe aera from the 1960s-1980s.

The back of the box has text that we have not had translated as of yet. It also includes at least three seals. One we recognize as that of Sugii Chugi from Kyoto. Sugii had an incredible collection of stones and we are very pleased this one came from his personal collection.  At the end of Sugii’s life his collection was sold and this stone passed into the hands of Matsurra Arishige, the past president of the Japan Suiseki Association.  We hope to have the back side of the lid of the kiri-bako translated at some point. Help anyone? 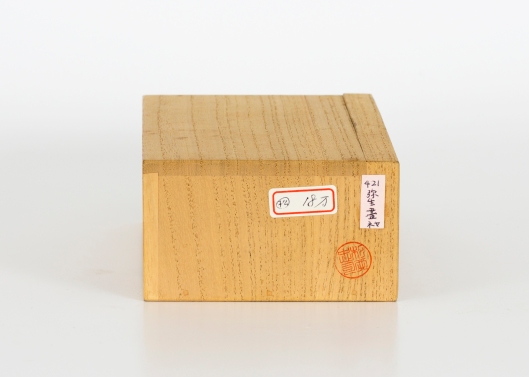 From the left side of the box, we see Sugii’s stamp and his acquisition number of 421.  This is a relatively early addition to his collection as we have seen other box numbers 2900 and higher.  As we mentioned, Sugii had an extensive collection.

Now that we are temporary owners of this wonderful stone, we wanted to share it with you so that its beauty can be seen beyond those that have had the opportunity to hold and cherish it.

2 thoughts on “Yayoijin – The Last Day of Spring”

This site uses Akismet to reduce spam. Learn how your comment data is processed.